When put to the test, only one product came out on top

Kleen Sweep is an organic and sustainable floor sweep product engineered by Enretech, that’s been on the market since 2001.

While its performance has always been well above that of other absorbent options, there was an absence of research into how it stood up against similar products globally.

This all changed in March 2017, when Enretech were contacted by a large multinational company based in Europe. Looking to add an absorbent to their chemicals and fasteners range, they had undertaken some basic research and come up with a short list of nine of the best products available across the globe.

Kleen Sweep was among the nine – the only Australian product to make the cut. The company asked Enretech to provide the Kleen Sweep product to undergo more rigorous testing that would allow them to narrow the field for the best organic absorbent on the market.

The quest for the best

While identifying nine top of the range products was good, this company weren’t willing to settle. It was their prerogative to narrow it down to one, which would be dubbed “The World’s Best Organic Absorbent for Hard Surfaces”.

To do this, each of the nine products would be tested. The winner would then be stocked and distributed by the multinational company, and gain the title of world’s best.

Testing was carried out using the following five criteria: 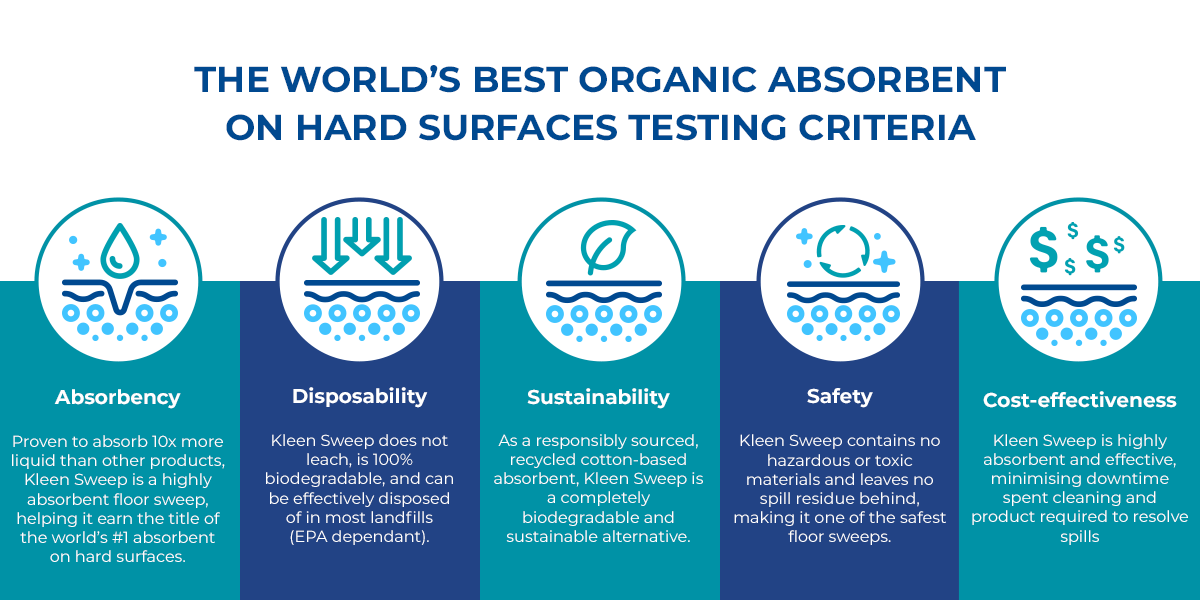 Each of these criteria would speak to the usability, sustainability and value for money of the product. All of which was important when determining which product was “best”.

A Kleen Sweep of the competition

Late in 2017, after the testing had been carried out and finalised, Enretech was once again approached by the company who carried it all out.

Kleen Sweep had come out on top, a clear winner based on the testing criteria. Because it is made from renewable natural by-products, absorbs up to 10x more than other available products, and is 100% biodegradable, Kleen Sweep swept the floor with the competition. Enretech now boasts The World’s Best Organic Absorbent for Hard Surfaces.

For more information on the most effective approach to spill management for your business, call me on +61 421 246 463, or to learn more about Kleen Sweep click here.